Go to https://github.com and register for an account. Make sure to choose a username that's professional and recognizable, since this will be your username even if you switch around jobs.

Now that you have set up your GitHub account, it is time to learn how to use it. Whenever you are logged in to the GitHub website, you will see a plus icon in the upper right corner. When you click on that, you will see a menu that includes a New Repository link. Click on that link. 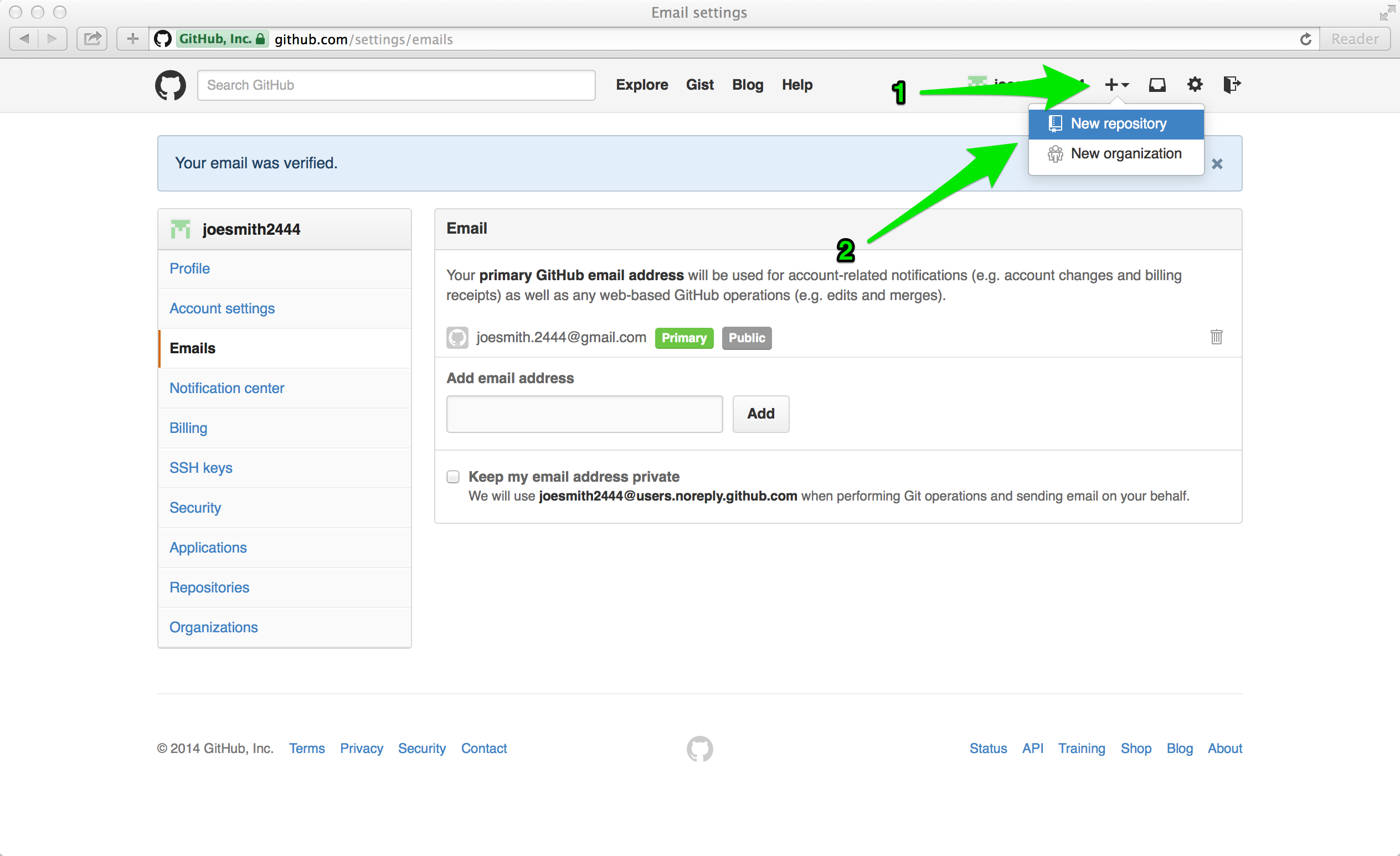 Choosing a repository name comes next. There are two general rules to follow:

In this guide, we are going to create a remote repository on GitHub.com where we can push the local repository that we created in the last chapter.

As you will see in this example, your local and remote repos do not have to have the same name. We will use my-first-repository as the name of our remote repository on GitHub. 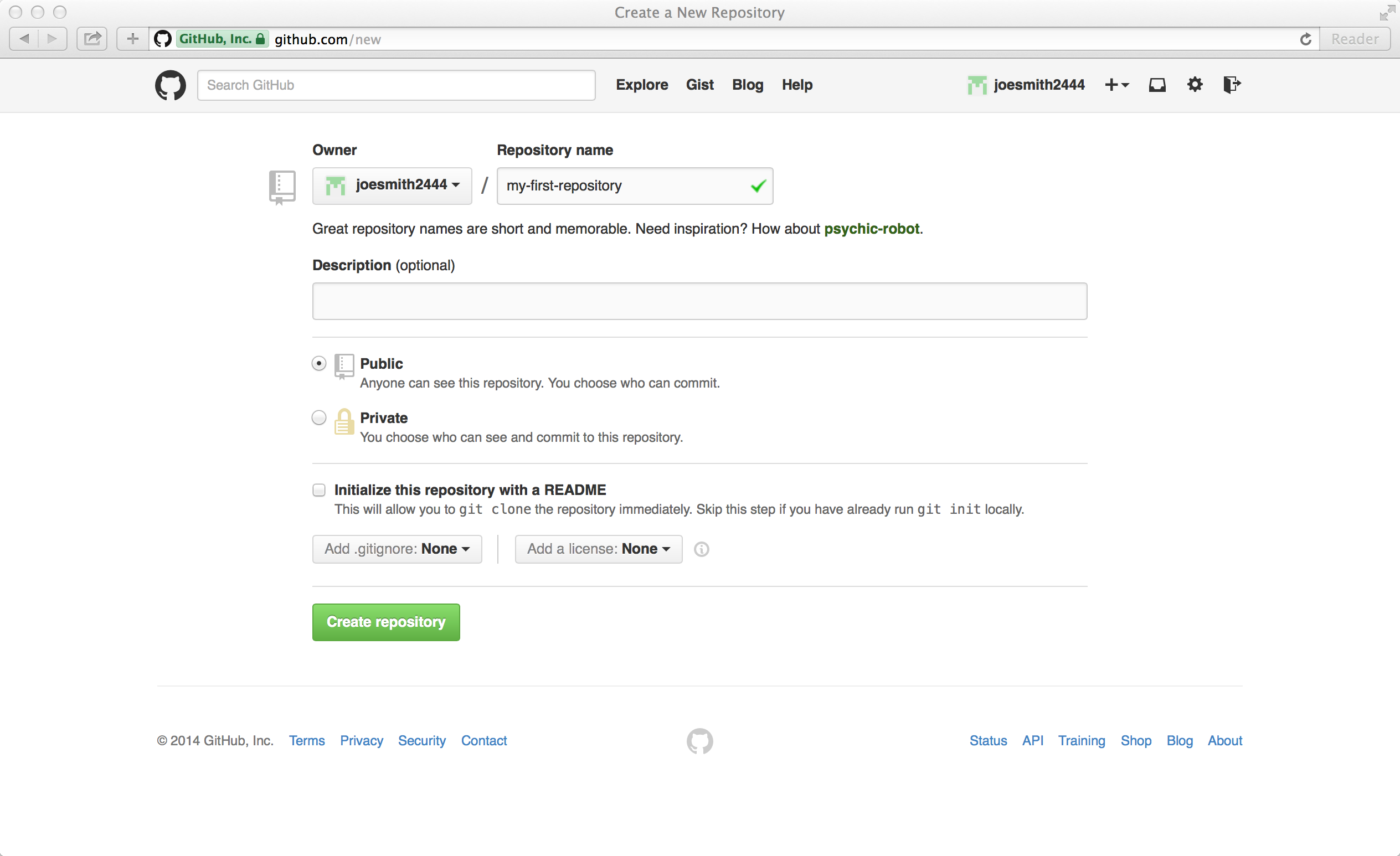 You will notice that GitHub has added a green checkmark in the text field where we typed our repo name. That tells us that our repo name has no problems and can be used. If you have spaces in your repo name, GitHub will automatically replace them with hyphens.

The next thing we need to look at is the Initialize this repository with a README checkbox. This is a very important step in creating your remote repo.

You will usually create your local repo first, so you will rarely check this box. Whether you initialize the GitHub repository with a README file or not, you need to understand conceptually the consequences.

For our example, do not initialize a README file, then click the Create repository button to create a remote repo on GitHub.com.

Now you should see instructions on how to connect your local repo to the remote one you just created on GitHub. Looking at just the first option, the set of git commands should look very familiar, we have already done the first four commands. We only need to perform the last two commands in order to link our local repository with the remote one. 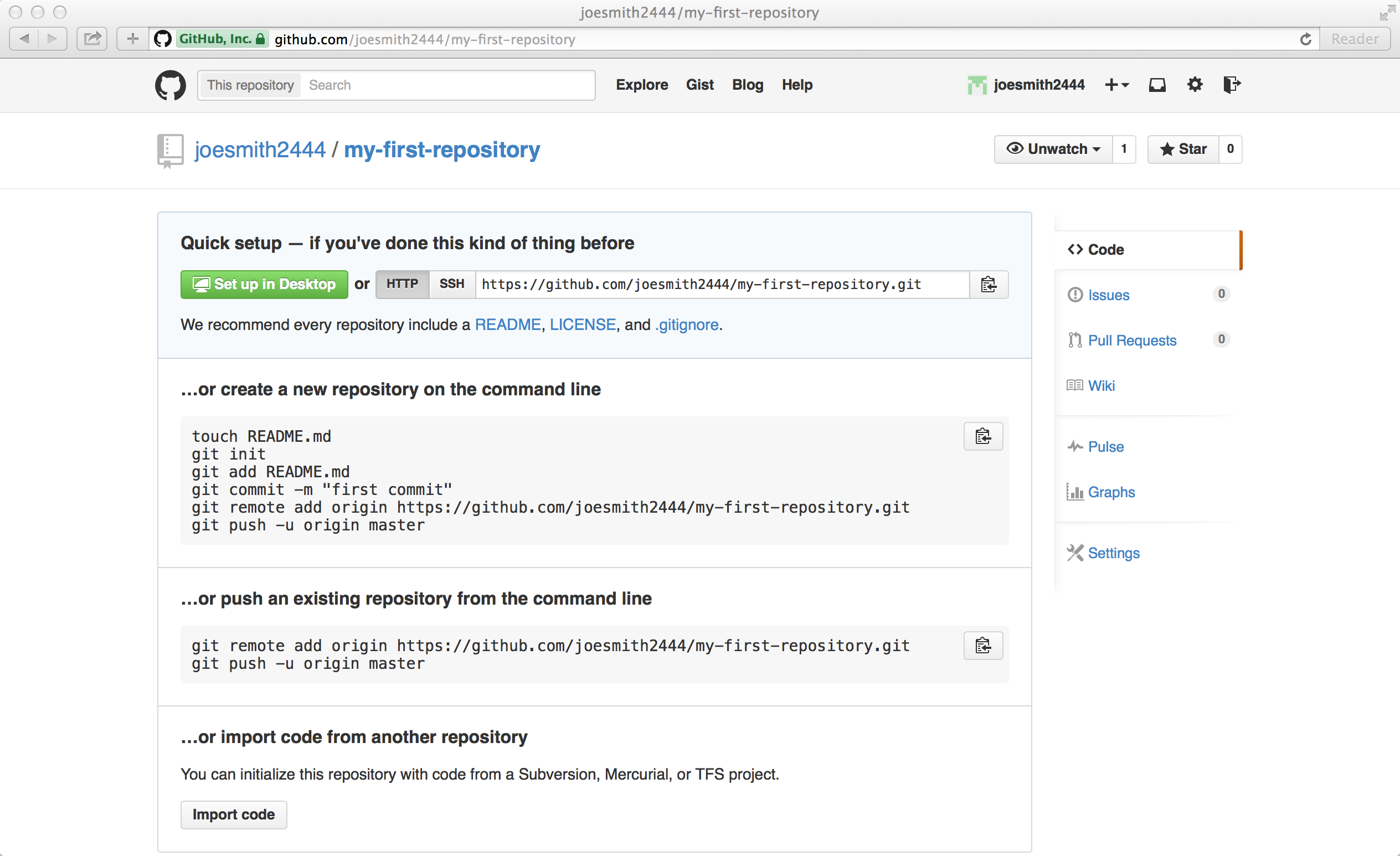 In the command line, execute the following command. You will need to insert your GitHub username:

What did we just do?

Before we move on, let's take a look at the command we just executed.

The origin is what we call an alias. The alias is the name that you will use locally to interact with this remote repo. You can have as many remote repos linked to your local repo as you want, but they must all have unique aliases. The instructions generated by GitHub always use origin as the alias. Any interaction that you have between your local repo and a remote repo will need to include this alias. You can name it whatever you like, but it must follow git naming conventions (no spaces, for example), but most developers use origin to mean the central repository where we're keeping the master copy of our codebase. More often than not, that implies a remote repo hosted on Github.com.

If you open ~/git_basics/.git/config in a text editor, you will see how git stores the information we just added. Recall that the .git/config file is where all the configuration settings for your local repository are held, and overrides any global settings. Note that your .git/config file may not necessarily look like the one below, which already contains an example remote repository called "origin".

The entries under [remote "origin"] are settings specific to that remote. The settings under [branch "master"] set up the tracking. For example, remote = origin tells your local repo to use the origin remote as the default remote for the local master branch to push and pull against.

You can cause a branch on your local repo (remember, every repo starts with a master branch by default) to track a branch on your remote repo. When you use a command that interacts with a remote repo, and do not specify which branch to interact with, the tracked branch will be used.

Now that we have laid all of the groundwork necessary to push our code to GitHub, let's do that!

In the command line, type the following:

Notice we used the -u flag. That flag sets the upstream repo, which causes our local master branch to track the master branch on the remote repo which is aliased as origin. We can now use just the git push command and it will know where to push it, because we set our upstream branch.

If you have never pushed to GitHub before, you will now be seeing a login prompt.

Once again, here's a breakdown of the command.

Github.com allows you to modify files directly on the website, but behind the scenes, it's packaging that edit into a commit on the remote repository directly. This is not a good habit to get into and is only recommended for very special situations.

The first two scenarios are by far the most likely scenarios, while scenario #3 and #4 are pretty rare.

Although it is not recommended to make changes using the GitHub editor, we will use this method to simulate and work through this workflow.

The first thing we need to do is view the remote repo. To do that, visit https://github.com. On the bottom right section of the screen, you will see a list of the repos that you currently have stored on GitHub.com.

Note: The Github interface may change over time, so these images may be out of date. If you see something different on your screen, don't panic. You should still be able to find the information that you need, though you may need to look around a bit. 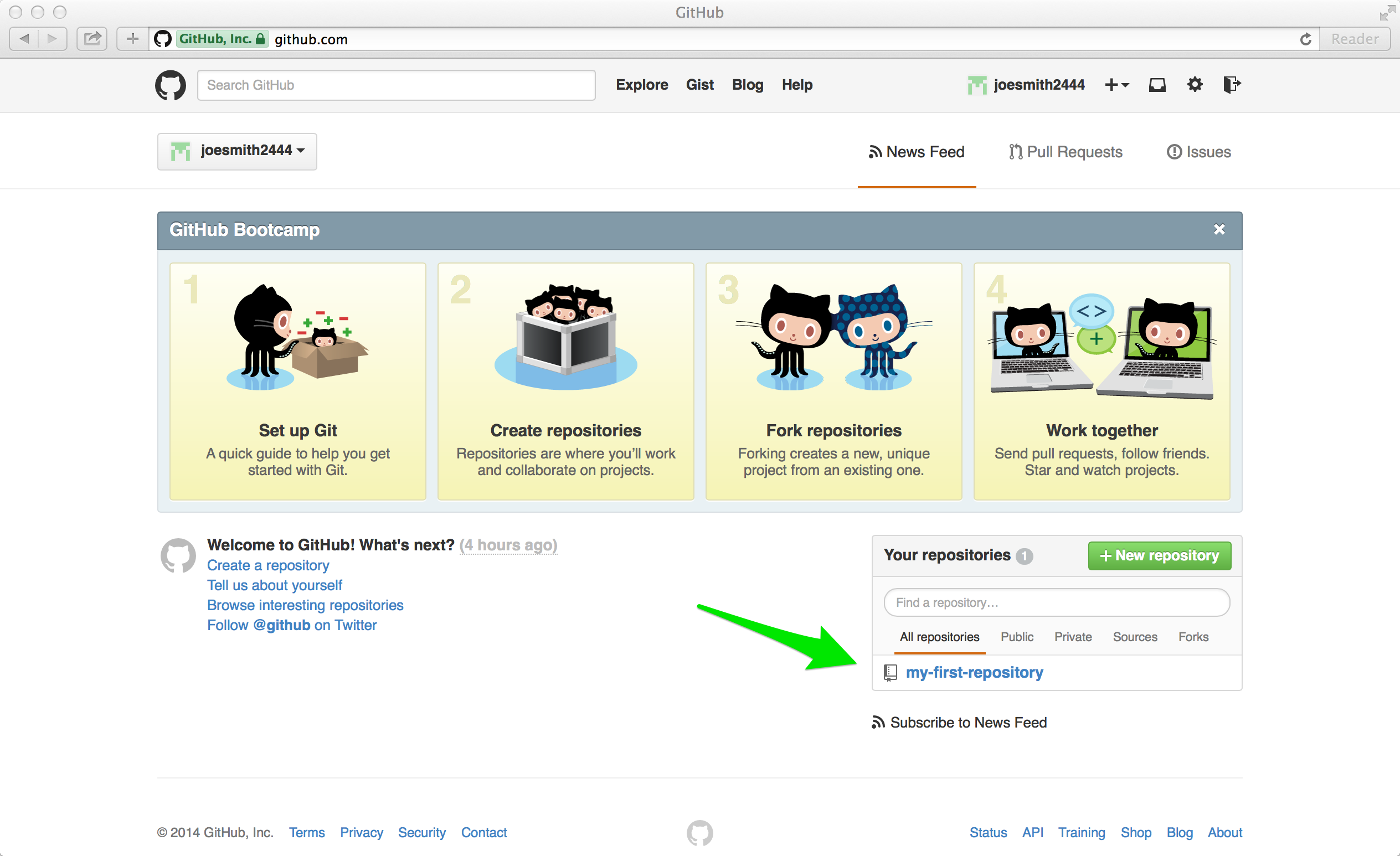 Click on the my-first-repository repo, and you will see the files that we pushed earlier in this chapter. 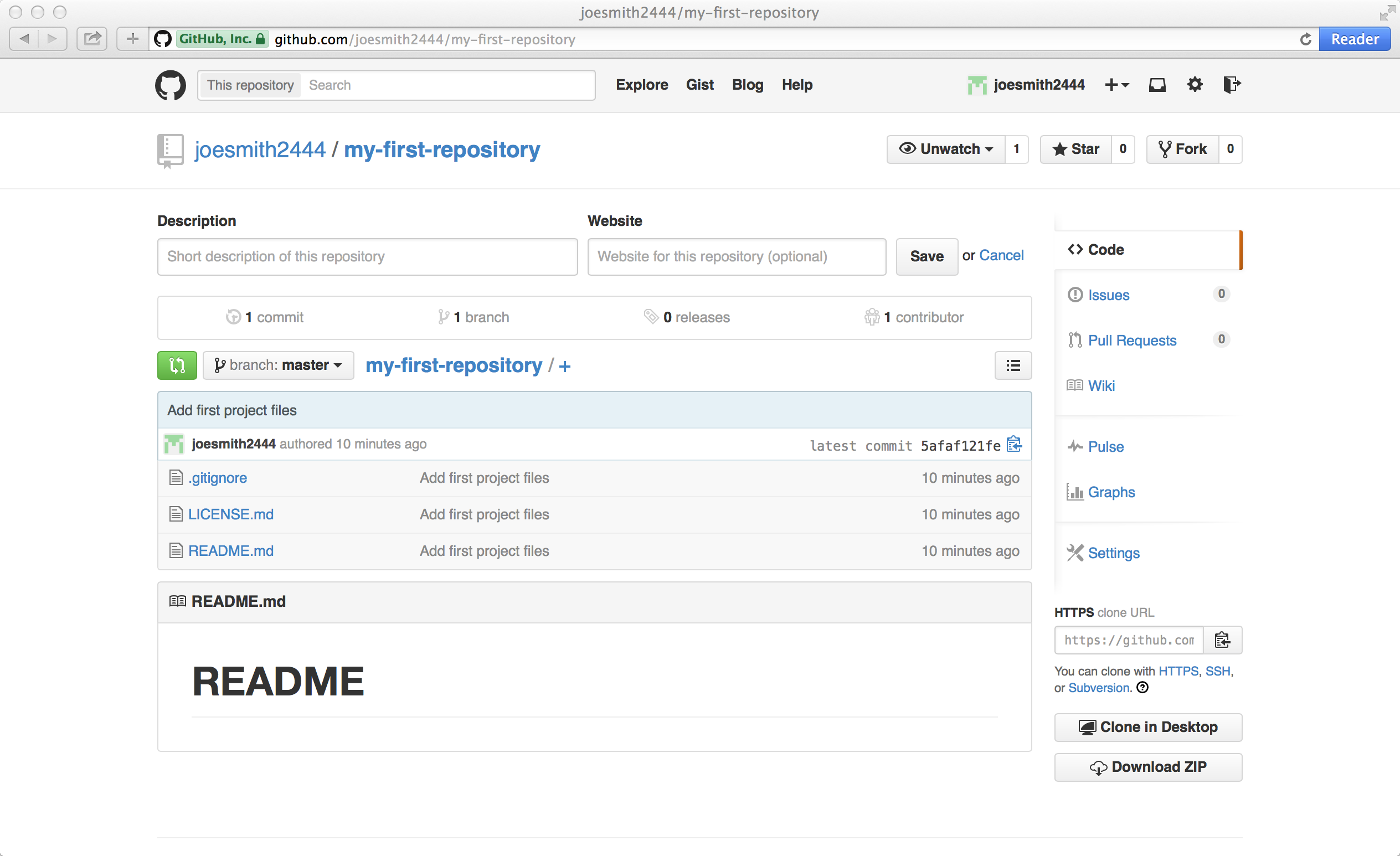 Notice that the contents of the README.md file are shown below the file list. This allows you to easily create documentation for your project, which GitHub will automatically display.

Now we need to make a change to a file. Click on README.md and then click on the pencil icon which is shown above the file's contents. 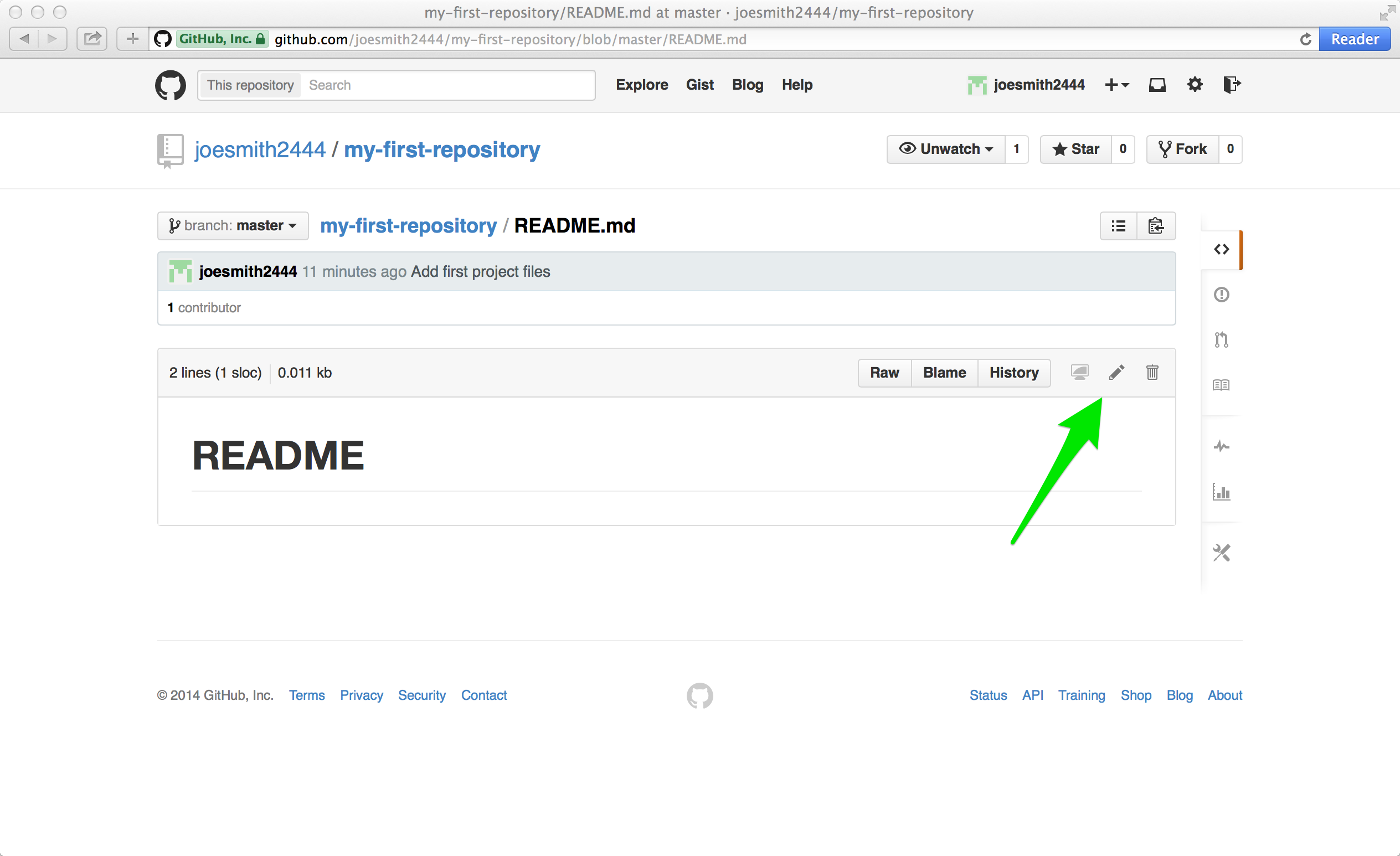 Modify the contents of the file using the editor and then scroll down. You will see two input fields. These fields allow you to create commit messages for the remote repo just like the git commit -m command did for our local repo. Type in a commit message and then click the Commit changes button.

While GitHub gives us a nice UI for editing files, committing a change in their UI has the same effect on the remote repository that modifying a file locally and then using git add and git commit does on our local repo. Once again, we're editing files directly on GitHub for purposes of this book only, as this is something you rarely want to do in real projects.

In the command line, type:

You should see some messages related to git downloading the remote changes. If you do not see any messages, your remote repo has no changes.

The next thing we need to do is look at what has changed. We do that using the diff command.

In the command line, type:

The output from the git diff command shows some changes in our README.md file. After you verify that you want to pull the changes into your local repo, type:

Since the local master branch has been configured to track the origin/master branch, you do not have to specify what branch to pull from.

Now if we open our local README.md file in a text editor, we will see the changes that we made on our remote repo using GitHub's editor.

Your local repo is now identical to the remote repo, and you can start working on files locally again. You can make changes to the readme file, commit the changes and push them to github again.

What is git clone

The git clone command has several options, but most of the time you will only need its basic usage. Here is what it looks like:

In the one command above, several things happened:

This means that you can now git push or git pull from the newly created local repository to/from the remote repository.

When to use 'git clone'

git clone is used mainly when you need to work with a remote repository, and do not yet have a local repository created. For example, if you just joined a new project, the first thing you'd likely do is git clone the project in order to start working on it locally.

Another common use case is if you want to pull down an open source project. For example, if you wanted to check out the source code for the popular open source web development framework, Ruby on Rails, you can issue this command:

A note on git init and git remote

The three commands, git init, git clone and git remote add origin <remote repo> may seem very similar at first, so let's take a look at when you should use them.

Let's rehash what just happened in this chapter:

As you can see from the above steps, working with git requires very detailed orchestration to make sure all repositories -- your local, your teammates', your other machines, and finally the central repo -- are all synchronized.

You may already see that there are many potential problems lurking just around the corner, but don't worry about that yet. You'll learn how to deal with conflicts and work with advanced git workflows over time. For now, just focus on working with git and Github on a one-person project.