As we've repeatedly stated throughout this book, the same attributes that make HTTP so difficult to control, also make it so difficult to secure. Now that you know about how web applications dance their way around the statelessness of HTTP, you can probably guess that there are some security ramifications lurking around the corner. For example, what if someone steals my browser's session id, does that mean they can log in as me? Or what if I'm accessing a random website, can they peek into my Reddit or Facebook cookie, where my session id information for those sites are stored? We'll spend this chapter discussing some common security issues that creep up with HTTP. This is by no means an exhaustive list of security issues; just common ones that any web developer would be expected to know.

As the client and server send requests and responses to each other, all information in both requests and responses are being sent as strings. If a malicious hacker was attached to the same network, they could employ packet sniffing techniques to read the messages being sent back and forth. As we learned previously, requests can contain the session id, which uniquely identifies you to the server, so if someone else copied this session id, they could craft a request to the server and pose as your client, and thereby automatically being logged in without even having access to your username or password.

This is where Secure HTTP, or HTTPS, helps. A resource that's accessed by HTTPS will start with https:// instead of http://, and usually be displayed with a lock icon in most browsers:

With HTTPS every request/response is encrypted before being transported on the network. This means if a malicious hacker sniffed out the HTTP traffic, the information would be encrypted and useless.

HTTPS sends messages through a cryptographic protocol called TLS for encryption. Earlier versions of HTTPS used SSLor Secure Sockets Layer until TLS was developed. These cryptographic protocols use certificates to communicate with remote servers and exchange security keys before data encryption happens. You can inspect these certificates by clicking on the padlock icon that appears before the https://: 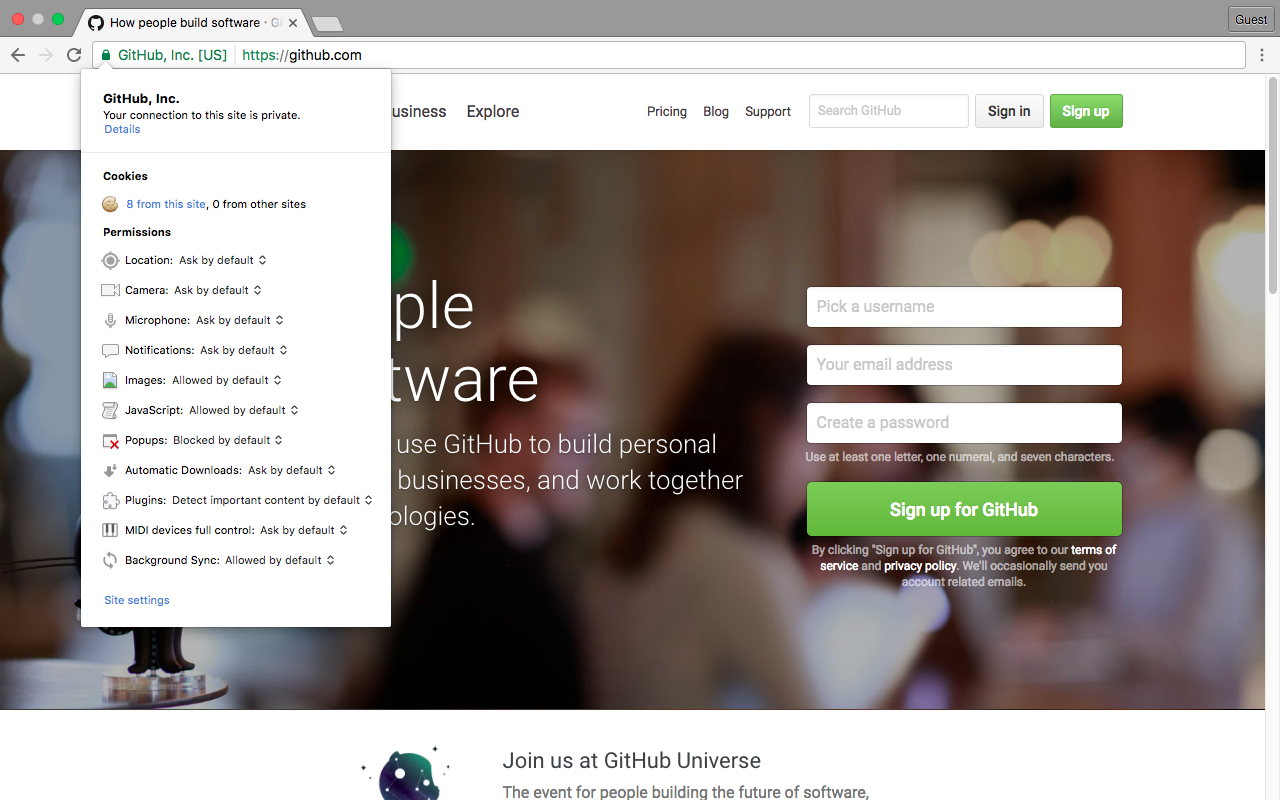 Although most modern browsers do some high level check on a website's certificate on your behalf, viewing the certificate sometimes serves as an extra security step before interacting with the website.

Same-origin policy doesn't restrict all cross-origin requests. Requests such as linking, redirects, or form submissions to different origins are typically allowed. Also typically allowed is the embedding of resources from other origins, such as scripts, css stylesheets, images and other media, fonts, and iframes. What is typically restricted are cross-origin requests where resources are being accessed programmatically using APIs such as XMLHttpRequest or fetch (the details of which are beyond the scope of this book).

While secure, same-origin policy is an issue for web developers who have a legitimate need for making these restricted kinds of cross-origin requests. Cross-origin resource sharing or CORS was developed to deal with this issue. CORS is a mechanism that allows interactions that would normally be restricted cross-origin to take place. It works by adding new HTTP headers, which allow servers to serve resources cross-origin to certain specified origins.

The same-origin policy is an important guard against session hijacking (see next section) attacks and serves as a cornerstone of web application security. Let's look at some HTTP security threats and their counter-measures.

Unfortunately, if an attacker gets a hold of the session id, both the attacker and the user now share the same session and both can access the web application. In session hijacking, the user won't even know an attacker is accessing his or her session without ever even knowing the username or password.

The final security concern we'll talk about, and a very important one for all web developers, is called Cross-site scripting, or XSS. This type of attack happens when you allow users to input HTML or JavaScript that ends up being displayed by the site directly.

For example, the form below allows you to add comments, which will then be displayed on the site. 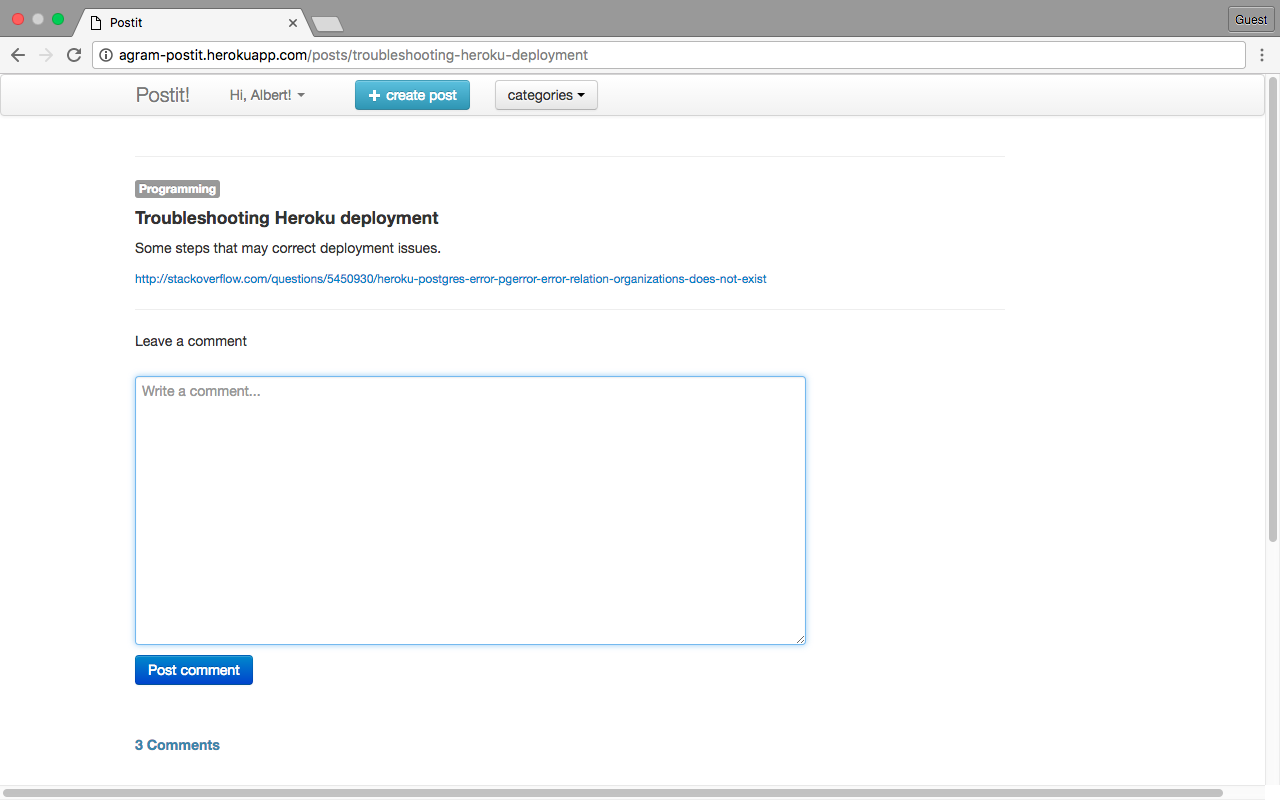 Because it's just a normal HTML <textarea>, users are free to input anything into the form. This means users can add raw HTML and JavaScript into the text area and submit it to the server as well: 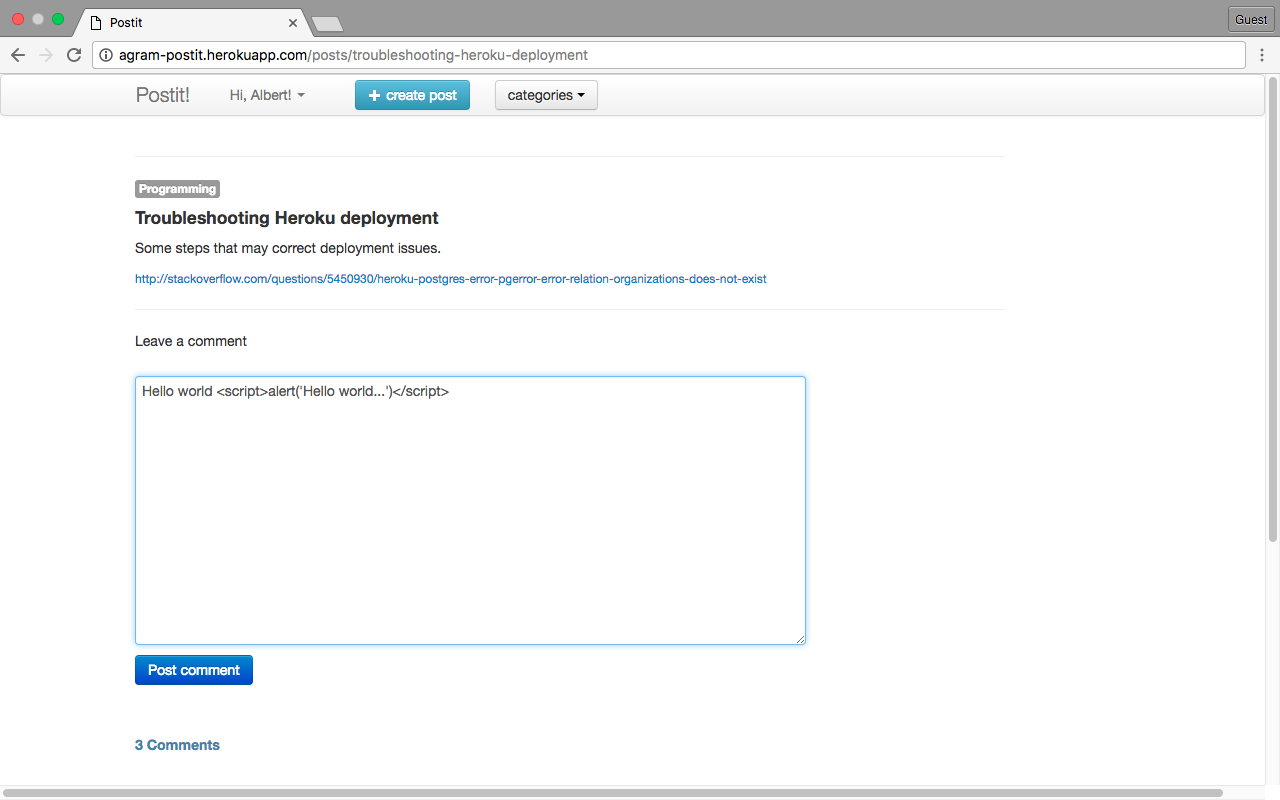 If the server side code doesn't do any sanitization of input, the user input will be injected into the page contents, and the browser will interpret the HTML and JavaScript and execute it. In this case an alert message will pop up, which is definitely not the desired outcome. Attackers can craft ingeniously malicious HTML and JavaScript and be very destructive to both the server as well as future visitors of this page. For example, an attacker can use JavaScript to grab the session id of every future visitor of this site and then come back and assume their identity. It could happen silently without the victims ever knowing about it. Note that the malicious code would bypass the same-origin policy because the code lives on the site.

Consider the following HTML: <p>Hello World!<\p>. Let's say we don't want the browser to read this as HTML. To accomplish this, we can escape special characters that the browser uses detect when HTML starts and ends, namely < and >, with HTML entities. If we write the following: &lt;p&gt;Hello World!&lt;\p&gt;, then that HTML will be displayed as plain text instead.

In this section, we covered various aspects of security in web applications. Needless to say, this is a huge topic, and we've only scratched the surface of a few common issues. The point of this chapter is to reveal how fragile and problematic developing and securing a web application is, and it's mostly due to working with HTTP.

Next:  Conclusion and Next Steps