Interacting With a Database

There are many interfaces, or clients, that you can use to interact with a RDBMS such as PostgreSQL. You may access the database from a programming language, through a GUI application that allows access and administration, or through the command-line interface. One thing these interfaces all have in common is the underlying architecture they use to interact with the database: they issue a request, or declaration, and receive a response in return. This is generally referred to as "client-server" architecture. PostgreSQL is a "client-server" database, which is an architecture design used by most relational databases.

What is "Client-Server" architecture?

An analogy for this would be a sushi restaurant where a chef in the center is preparing sushi and people walk up from their tables to order and then to pick up their food. You can think of the chef as the server, the food as the data and the customer as the client. With a database, we connect to the server, such as a PostgreSQL server, using a client, like a PostgreSQL Client. The client transmits commands to the server and the server sends the result or data back. 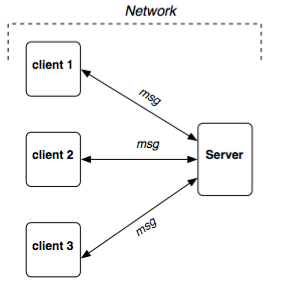 If we think about this image of the sushi restaurant a little further, we can imagine that there might be numerous ways of submitting your sushi order, depending on the restaurant. You could for example give your order to a waiter who writes it down and then passes it on to the chef, or you could speak to the chef directly; certain restaurants might have some sort of touchscreen system which lets you select which sushi you want and this information then gets relayed to the chef. These different ordering methods are essentially different layers of abstraction within the same basic model.

Similarly, whichever type of PostgreSQL client you choose to use, that interface is basically an abstraction; ultimately they all work by issuing queries to the database, using SQL syntax. Depending on the client, that SQL syntax may be 'wrapped' in some other commands or even abstracted altogether by some sort of visual interface, but underneath it all the same thing is essentially happening.

One client application that we will be using throughout this book is psql. psql is a PostgreSQL interactive console, or a terminal-based front-end to PostgreSQL. It allows you to write queries in SQL syntax, issue those queries to a PostgreSQL database, and see the results of those queries in the terminal window. In that sense the psql console is essentially a REPL; you may already be familiar with other REPLs, such as IRB.

An important thing to remember about commands such as createdb, dropdb, etc is that you call them from your terminal, and not from within the psql prompt.

In your terminal, issue the following command.

Note that the prompt is a $, which means that we are in the terminal where you enter shell commands. Further code blocks below will no longer have the $ prompt, which signifies that we are within the psql console. Be sure to pay attention to this small detail if you're typing along. Now may also be a good time to quickly review the Other Interfaces chapter from our Command Line book.

Remember: if you're using Cloud9, you probably need to use sudo -u postgres to run the psql command:

This is basically telling PostgreSQL to open the psql console and connect to the database called 'postgres' (note: 'postgres' is a default database that is created when you install PostgreSQL). You should see a response like the below code block. Your postgres version number may be different, but that shouldn't make a difference for this book.

You are now connected to the database called 'postgres' and can issue commands to it. Notice that the prompt is now the database name followed by = and #, which is distinctly different to the usual command line prompt of $.

One thing to be aware of is that PostgreSQL is more tightly coupled to the UNIX environment than some other database systems. It uses the native user accounts to determine who is connecting to it (by default). Many of the commands that you may need to run are available as executable programs that can be run from anywhere on the machine the database is running on, assuming that the user running them has the correct permissions.

There are two different types of commands you can issue from the psql console prompt:

The syntax for a psql console meta-command is a backslash \ followed by the command and any optional arguments. One example would be \conninfo; try running that command from the psql console prompt. You should receive a response detailing any relevant connection information for your current connection to the database.

Meta-commands can be used for a number of different things, such as connecting to a different database, listing tables, describing the structure of a particular table, setting environment variables, and so on.

We'll look at some examples of meta-commands later in this book. For now, one useful command to remember is \q, which quits the psql console and returns to the normal command line. Make sure to note this down, otherwise you'll be stuck inside the psql console.

SQL statements are commands issued to the database using SQL syntax. A simple statement might look something like this:

SQL statements always terminate in a semi-colon. This means that you can actually write statements over multiple lines; PostgreSQL will not execute the statement until it reaches the semi-colon. The above example could have been written in the following way:

A SELECT statement is used to retrieve data from a database. Whichever way you write it, the response in the psql console would look something like this:

(Note: the above code is for example purposes only. We haven't created a people table, so these queries won't work if you try to run them).

In the next chapter, we'll look a little bit more at what some of the different parts of a SELECT statement like this mean. Before we break-down the syntax of the language in detail, let's briefly outline some higher-level distinctions.

SQL can be thought of as comprising of three separate sub-languages, each concerned with a specific aspect of manipulating or interacting with a database. The three sub-languages are:

This book is concerned with looking at the first two sub-languages in this list, DDL and DML.

The remainder of this book will be mainly focused on SQL statements. In the next chapter we'll run through a few simple examples of a sub-set of these statements in the form of SELECT queries.